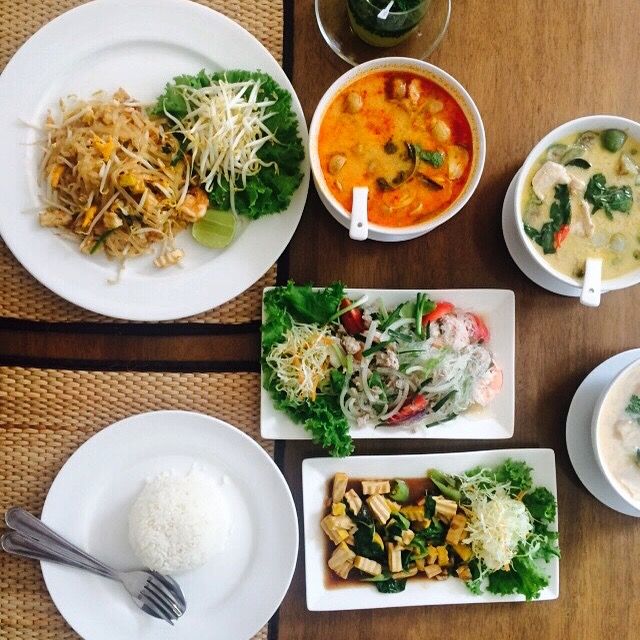 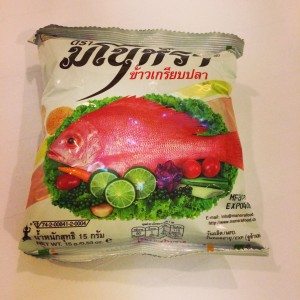 Despite being featured on every travel food show from No Reservations to Bizarre Foods for its fantastic array of street eats and assembly of various regional Thai cuisines, I was hesitant to visit Bangkok and experience this foodie paradise. In part I blame the movie Hangover II, a 2011 blockbuster comedy about bachelor party shenanigans in downtown Bangkok. While few praised the movie for its plot, it did receive kudos for an accurate portrayal of Bangkok nightlife. EEK! The second reason I hadn’t put Bangkok on the top of my travel list for my short stay over in Singapore was that my Singaporean colleagues take the puddle jumper over to Thailand’s capital city primarily to hit the malls…because there aren’t enough malls in Singapore. (That is a joke, my friend, but more on that later). 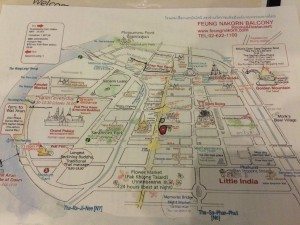 So what convinced me? My sister recommended taking a tour with Grasshopper Adventures and said it was the highlight of her travels to Bangkok, Hong Kong and Singapore. I put the word out that I was planning a trip to participate in one (or two) of these bike tours and found a friend (and her niece) who wanted to join me! I seriously lucked out because this friend had grown up in Malaysia near the southern border of Thailand and had taken the night train over to Bangkok to visit relatives (and shop…) many times. I booked our tour and she took care of picking a hotel in the neighborhood of the bike shop, which also happened to be the historic old town, which was out of the hustle and bustle of the city and within walking distance of both popular and quiet, forgotten temples. The location was really money and the cafe wasn’t bad either. We had a surprisingly nice lunch there after a long morning of traipsing around parks and temples. There weren’t any restaurants open in the neighborhood for some reason and none of us felt like braving the street food. 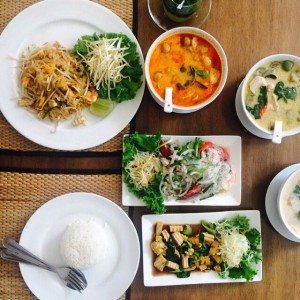 Lunch at the hotel 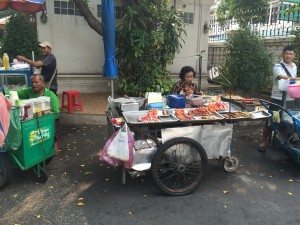 Hard to resist the smells, but…

We met some girls at the hotel that had only days ago recovered from a 24hr episode of food-induced toilet-bowl-embracing and were heading out to sample more mystery meat. God bless them. While Bangkok is really known for street food, if you are reactive to gluten, chances are you don’t have the strongest mucosal barrier (what allows dogs to drink dirty water and not get sick), so I personally wouldn’t recommend taking the risk. There are plenty of other wonderful options. 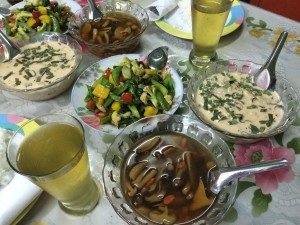 Our bike tour included a lovely dinner cooked by a local family and served in their dining room. The tour company partners with several families for these dinners and is able to accommodate any special dietary requests (the tour itself was AMAZING, this was the icing on the cake). We had a delicious gluten-free and vegetarian meal that included a mushroom, broth based soup, a tom kha soup with mushrooms instead of chicken, and heaps of sautéed veggies, followed by local delicacy of mango sticky rice with fresh coconut milk and crunchy, salty fried sesame seeds. 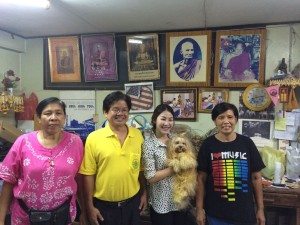 We were joined at the table by the head of the neighborhood council who had dropped by to say hello and the wonderful chefs.

The other highlight of this mouth-watering odyssey through Thailand’s capital was a huge spread ordered by my friend Yee Lin’s Thai cousins at a restaurant in Siam Square. Although I wasn’t keen to hit the malls, I did appreciate the chance to see Bangkok’s “Hello Kitty House“, which was just as pink and kitschy as you might imagine. 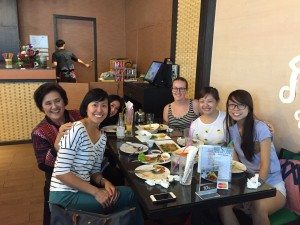 Having the privilege to dine with a local family who ordered all their favorites off the menu (and were able to clue me in to which ones were soy-sauce free, and safe to eat) is a memory I won’t soon forget.

A little googling and I think I’ve narrowed down the name of the place to Phuthai2514, but good luck finding a website. The northern Thai (or Isaan) menu included everything from frog salad to grilled pork tongue and despite the request from one of our host’s to tone down the spice level, it was eye-watering. We had a great time.

What is the verdict for a gluten-free traveler who wants to experience Bangkok? You won’t feel left out in Thailand’s culinary mecca. Even though you can’t be as freewheeling as some of your friends who can just point at a menu and try anything, if you stick to curries and coconut-based dishes like Tom Kha Kai, you should be safe. Like anywhere else, avoid fried foods and anything with a suspect soy-sauce color marinade or sauce unless you can verify that it is safe. If you don’t have a local tour guide to help you out in restaurants off the beaten path (or speak Thai), try to set up a tour with prearranged meals. Grasshopper Adventures made this part really easy and their bike tour through the back streets of the old Portuguese settlement, the night flower market and some of Bangkok’s most famous temples at the hush of dusk was very memorable. I wouldn’t count on being able to communicate with wait staff, but we did come up with the great idea of printing out a picture of the local brand of soy sauce with a big red X over it because my friend’s cousins said there is really one main brand of soy sauce that is very recognizable in Thailand. If anyone has the energy to make an app for this with various local soy sauce brands, I’ll pay you 2$.

That concludes my short weekend in Bangkok. If you missed my posts on traveling gluten-free to Bali or Krabi, check them out below! 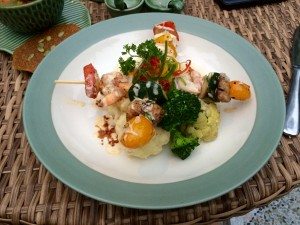 Eating at a spa cafe in Ubud, Bali https://www.engineeringradiance.com/2015/02/gluten-free-travel-ubud-bali/ 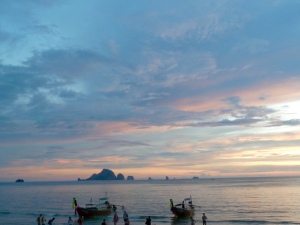 Occasionally I tore myself away from the scenery to enjoy a meal…https://www.engineeringradiance.com/2014/12/gluten-free-krabi-province-thailand/