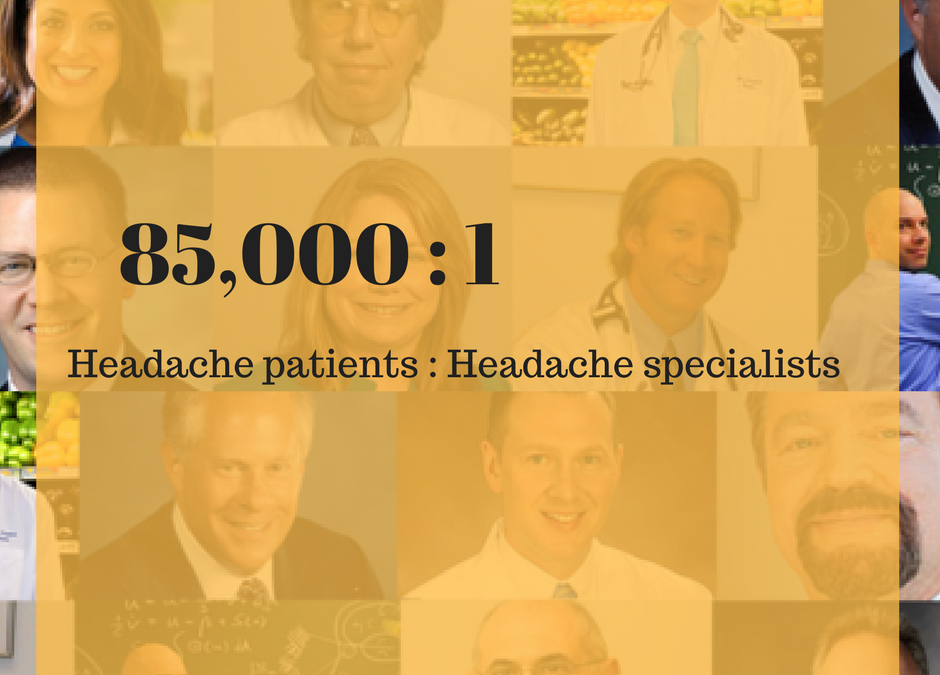 There is less than one headache specialist for every 85,000 patients in the US (not people – patients!). This ratio is similar or worse in other countries around the world.

For the vast majority of us this means we need to work with someone who hasn’t specialized in headache or migraine. Usually this will be our family doctor or general physician.

But here’s the problem.

The family doctor or general physician has on average committed just 4 hours of headache education in their undergraduate medical degree. Four hours. This figure was revealed in the World Health Organization’s ‘Atlas of Headache Disorders’ report. We’ve spent more time in the doctor’s waiting room.

When I was working with my primary care doctor on my migraines as a teenager he handed me a printout about an elimination diet and said “here, try this for 3 months.” That resulted in a summer of me basically starving, because after I removed all the foods I couldn’t eat I was hardly eating at all. He didn’t realize the importance of supporting someone through an elimination diet so that they actually realize the benefits of it.

Later he recommended I try Prozac (a popular prophylactic migraine drug at the time) with utterly disastrous results – mainly stemming from a lack of guidance and follow-up.

Perhaps you’ve had similarly disappointing results trying to get help with your migraines from a generalist?

Some people might see a neurologist thinking that they are seeing a headache specialist, but even a neurologist isn’t necessarily a headache specialist unless they focus specifically on headache patients. Many neurologists specialize in other areas or practice in general neurology and will see patients with a range of neurodegenerative disorders and spinal cord disorders including rheumatoid arthritis, Alzheimer’s, multiple sclerosis, epilepsy as well as headache patients.

The shortage in headache doctors is nothing less than a crisis for migraineurs. Unfortunately, the number of headache doctors or the hours of education does not appear to be improving rapidly.

That’s why we’re supporting the Migraine World Summit. The world’s largest event for informed patients who want to know the latest new medical treatments & research to prevent and treat migraine.

I sat down this week to talk with Carl Cincinnato about his migraine story and what motivated him to produce and host this awesome event:

There will be 31 experts, doctors, and specialists from leading institutions including the Mayo Clinic, Harvard Medical School, Cleveland Clinic, Stanford, John Hopkins Hospital, and the International Headache Society.

We may not be able to find a headache specialist locally but with the help of the Migraine World Summit we can learn what we need to get the best results in partnership with our current healthcare professional.

Claim your FREE ticket now at the following link:

This year tens of thousands of informed patients will tune in to over 30 NEW interviews which provide the answers you need to get your best health outcomes. Questions answered include:

For those who miss out or cannot attend live, all the interview recordings are available to order and download. All the video, audio and transcripts are available anytime on demand. Up to 50% of funds raised from the Summit will go towards migraine charity partners listed on the event page, who are doing wonderful work to help fund migraine research, support patients and advocate for migraine sufferers.

To date, this event has donated over $10,000 to migraine specific charities, groups and foundations!

Leave us a comment with a question that you hope is addressed during the summit! We’ll try to direct you to a talk that will help you 🙂